Notices regarding the Joint Development of Wireless Power Charging System with Ossia based in USA, and Demonstration Exhibit at CES 2016

Back to News Title

Regarding the wireless power technology, "Cota"

"Cota" is Ossia's unique wireless power technology and is designed with the ability to deliver up to 1 watt of power from a remote distance of up to 10 meters [1]. 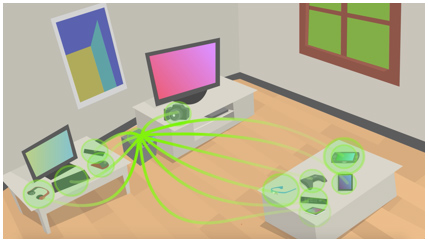 Regarding exhibition at CES 2016

We will be exhibiting a demonstration at "CES (Consumer Electronics Show) 2016" which will be held in Las Vegas in the US.

<Reference> Regarding the market environment

The number of devices connected to the Internet has been increasing every year and in three years from now by 2018, the number of IoT devices on the domestic market is predicted to reach 900 million devices.
(Source: IDC Japan "IDC FutureScape: Global and Domestic IT Market Predictions for 2016")

Further, according to results from a survey conducted on the satisfaction of users in regard to the utilization of smartphones, many were unsatisfied with "how long the battery lasts." In consideration of the increase of IoT devices in the future, it is believed that there is a huge potential need for wireless power charging technologies such as Cota that are free of restrictions regarding time and places for charging devices.

Survey regarding Satisfaction and Dissatifaction related to Smartphones" (October, 2015))

About the KDDI Open Innovation Fund

The "KDDI Open Innovation Fund" is a corporate venture fund, operated by KDDI and Global Brain Corporation, which invests in promising venture companies both in Japan and overseas. Through coordination with KDDI's broad network of numerous companies, marketing skills, and various services such as "au Smart Pass," the fund powerfully supports the growth of companies subject to an investment.
Further, in the US, with an operating base in San Francisco, the fund considers investments in relation to startup companies that have the latest technology or an innovative business model. KDDI Open Innovation made in Ossia in January of 2015. In the event that the Company considers expanding into Japan, the fund will provide extensive support with business development, marketing, localization, etc.