KDDI, OYO and Toyota Agree to Cooperate on Gathering Data to Realize Disaster Prevention and Mitigation through the IoT

This system will bring together KDDI's demographic movement data, OYO's various data from disaster monitoring sensors, probe data obtained through Toyota's connected cars, and publicized data, such as weather information, with the aim of creating all kinds of disaster prevention information.
This system will enable local administrations to, e.g., ascertain where the passable roads are, and allow the monitoring of extensive infrastructure in real time and during disasters or normal times. It will boost the accuracy and speed of decision-making in issuing evacuation warnings, regulating traffic, etc., ensuring safety in the daily lives of local residents.
Moreover, an exhibition will be held with a concept demonstration of this system, and explanations will be given on the concept behind the business at The 16th ITS Asia-Pacific Forum FUKUOKA 2018 to be held on May 8, 2018, in Fukuoka City. 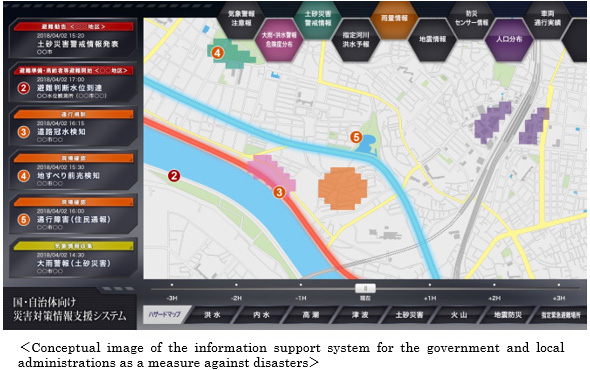 Events That Prompted the Development of This System

In response to natural disasters, such as earthquakes, typhoons, localized torrential rain, landslides, damage from heavy snow, etc., that have struck frequently in various regions in recent years, local administrations have established systems for gathering, analyzing and communicating information on disaster prevention. Then evacuation warnings are issued (such as traffic regulation on roads before and after disasters, and issuing of evacuation orders to residents) after a variety of decision-making processes.
On the other hand, local administrations are faced with more people in need of assistance during evacuation due to aging, and more cases of abnormal weather, as well as larger, more extensive and complicated disasters due to global warming, in addition to dealing with aging infrastructure. This has led to the need to further bolster regional disaster prevention systems.
To resolve these issues, the three companies are combining and analyzing the big data they hold to come up with methods of efficiently gathering and analyzing disaster information, and consider optimal methods of providing assistance during disasters.

This system will enable vehicles and smartphones to be used as mobile IoT sensors to complement data gathered through fixed sensors set up by the government and local administrations.
Merging and analyzing the various kinds of big data gathered through these new mobile IoT sensors will allow the establishment of an extensive infrastructure monitoring system during disasters as well as normal times. This will boost the accuracy and speed of decision-making by the government and local administrations by enabling the discovery of signs prior to disasters, on-site confirmation, implementing of disaster prevention measures (traffic regulation, evacuation warnings, etc.), on-site safety confirmation, and the lifting of regulations and warnings.

Preparing for Practical Application of the System

The Role of Each Company

1], and newly developed demographic movement analysis/prediction technology. This will enable, e.g., effective transporting of supplies during disasters by, e.g., analyzing the population distribution at shelters.

OYO will make use of its achievements and experience in providing consultation services for disaster prevention and mitigation for the government, local administrations and various research institutes, to set up various sensors (water level monitoring, Inclinometer Monitoring, seismographs, inundation sensors, etc.) throughout regions to monitor natural disasters around the clock. This data will then be provided to the system. Moreover, the company will contribute to mitigation of disasters and the safety of residents by supporting the executing of disaster prevention action plans (timeline) that need to be implemented by the people in charge of dealing with disasters at local administrations when alerts are issued.

Toyota will provide this system with data that has been processed statistically by the Mobility Services Platform gathered from traffic information probes and hazard lamps, information on outside air temperature, etc., and enable visualization of the state of traffic to contribute to the securing of greater urban safety and security. 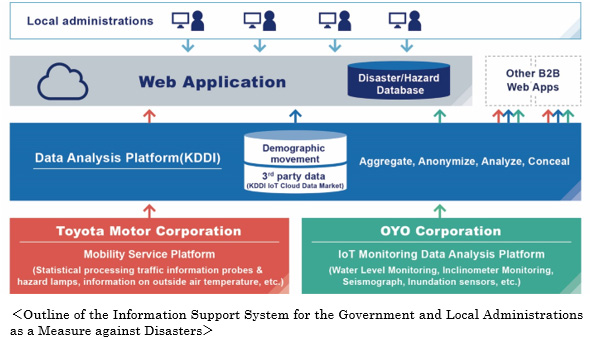