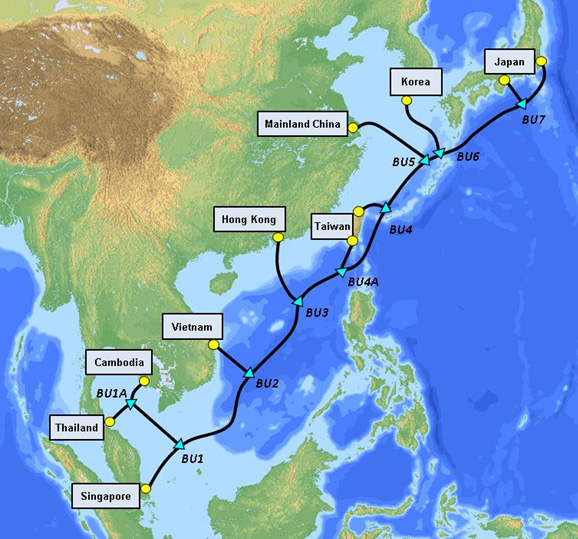 The latest submarine cable to be constructed by KDDI, the 10,500-kilometre cable has links to eleven cable landing stations in the region and is expected to be completed by the fourth quarter of 2020.

The cable will feature up to eight pairs of high capacity optical fibre with initial design capacity of 144 Terabits per second, roughly the equivalent of simultaneously streaming 5.76 million ultra-high definition videos per second. Its high capacity allows it to support high bandwidth intensive requirements such as the Internet of Things, robotics, analytics and artificial or virtual reality applications.

Landing this SJC2 in KDDI's two stations at Chikura and Shima will provide geographical diversity of cable landings in Japan and reinforce our resiliency of international telecommunications services to Asia. We maintain the same objective when we constructed and started operating FASTER to US with two landings in Japan back in 2016.

KDDI is one of the largest telecommunication service providers in Japan, offering both mobile and fixed-line communications. With its well-established base of over 50 million customers, and through mobile services and shops offering its "au" brand, KDDI is expanding its services into the "Life Design" business, which includes fintech, e-commerce and nationwide electric power utility services. With a 60-year history, KDDI is now focusing on creating smart infrastructure through IoT technologies and open innovation with partners and start-up companies in diverse industries. KDDI is accelerating the global growth of its telecommunications consumer business, with operations in Myanmar and Mongolia, and in the global ICT business with the "TELEHOUSE" brand. KDDI (TYO: 9433) is listed on the Tokyo stock exchange. Please visit our website at